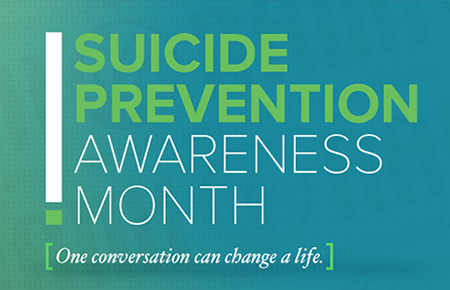 This month of September is Suicide Prevention Awareness Month. Every year, more than 1 million people die by suicide worldwide. Despite being one of the leading causes of death, it remains a taboo and an underreported issue.

Prevention of suicide has not been adequately addressed due to lack of awareness of suicide as a major public health issue.

The link between suicide and mental disorders is well established in high-income countries, yet there is still an alarming rate of suicides each year. It is important to raise awareness around suicide and its warning signs. Often these feelings are triggered by a crisis and the inability to deal with life stressors, such as financial problems, relationship break-up, or chronic pain and illness. This is why it is so important to reach out to loved ones, one conversation can change a life.

The transition from warrior to civilian can also be difficult for veterans. However, with love and support from people close to them, many veterans are overcoming these difficulties. If you are concerned about a veteran in your life, encourage them to seek help. Each branch of the military provides services for members and their family. The Office of Veteran Affairs Crisis Line is available online or by calling 800-273-8255 or 988 This number is a toll-free, confidential resource that veterans, their families, and their friends can access 24 hours a day, 7 days a week, 365 days a year. This office has served over 2.8 million callers since 2007, serving around 300,000 veterans annually.

We can combat suicide by promoting communication and discussion and by offering stigma-free support awareness. Zeiders behavioral health specialist promote suicide awareness and team with the military and veteran communities to support and carry out prevention efforts. Whether it is by reaching out, raising awareness, or providing resources, working together to help individuals and communities in need can change lives every day.