With Memorial Day on the horizon, please join Zeiders on May 24, in recognizing National Poppy Day®.

After World War I, the poppy flourished in Europe. Scientists attributed the growth to soils in France and Belgium becoming enriched with lime from the rubble left by the war. The red poppy came to symbolize the blood shed by those who fought and those who continue to fight for our country following the publication of the wartime poem “In Flanders Fields.” The poem was written by Lieutenant Colonel John McCrae, M.D. while serving on the front line in World War I, to honor soldiers killed in battle. In 1920, the poppy became the memorial flower of The American Legion Family.

The American Legion has the support of Congress to designate the Friday before Memorial Day as National Poppy Day®, a day that encourages all Americans to wear a red poppy as a symbol to honor the fallen and support the living heroes who have worn our nation’s uniform.

Chartered by Congress in 1919, The American Legion is the largest wartime veterans service organization with nearly 2 million members in 12,875 posts in communities across the U.S.

Focused on four distinct pillars of service, The American Legion is committed to advocacy for veterans, a strong national defense, mentoring youth and keeping patriotism and honor alive and well.  More information about The American Legion can be found at legion.org. 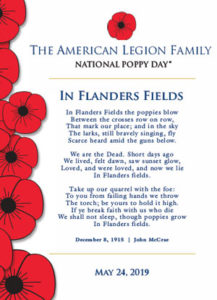